Yesterday evening, a patron visited the Library with a handful of undated, unidentified photographs.  He said they were taken by Elvin Carlisle, a former resident of Mooresville, Indiana, who had moved to California at some point.  Otherwise, the patron had no details.  Could I determine when and where the photos were taken? 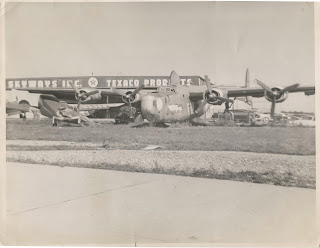 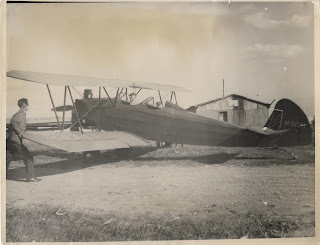 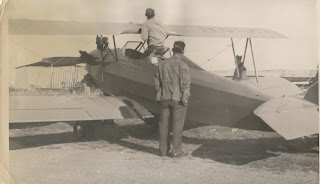 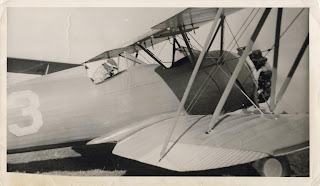 The biplane photos are Boeing-Stearman Kaydets, commonly used by the U.S. Army Air Corps and U.S. Navy as pilot trainers during the 1930s and 1940s.  Although it is impossible to definitively determine from these black-and-white photos, the lighter wing color against the darker body color (in two of the images) suggests that aircraft N610M (see number on tail and right upper wing) was Stearman model N2S (or model PT-17), commonly known as the "yellow peril," because of its bright yellow wings and tail. 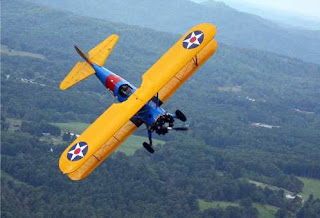 The presence of these biplanes in the Carlisle photos suggests World War II pilot training, which narrows the time period to, say, 1940-1945.  The B-24 photo, however, has details that enable us to more precisely date the pictures. 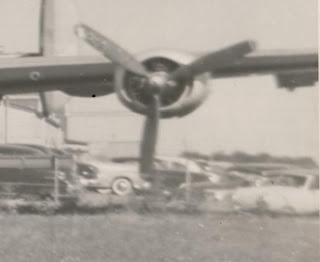 The automobiles in the background of the B-24 photo appear to be early 1950s models, so we may tentatively date the images circa 1950-1953.

Our best clue is the company name on the building behind the B-24:  Skyways, Inc.  Preliminary Internet searches determined that Mary Zerbel Hooper Ford, a WWII RAF female pilot from Marquette, Michigan, and her second husband, WWII American flying ace Jack Ford (from Los Angeles, California), opened an aircraft ferrying business, Fleetway, Inc., in the Los Angeles area following war's end.  They later changed the company name to Skyways, Inc.  During the late 1940s and through the 1950s, the Fords and their staff (as many as 50 pilots) delivered hundreds of war surplus aircraft to various air forces and civilian aircraft enterprises worldwide.  Jack Ford was killed in a plane crash in August, 1959.  (Richardson, August 2012 online newsletter).

Having narrowed the probable location of the photos to the Los Angeles area, we should determine if other details from the pictures reinforce this conclusion.  We know from our patron that Elvin Carlisle (who took the photos) moved to California following WWII.  Skyways, Inc. operated in the Los Angeles area.  Are those mountains behind the automobiles in the B-24 picture?  It could be simply an airplane hanger.  Certainly, the grounds in the photos seem arid--what little grass is light-colored, and there are no shrubs or trees (of course, it is an airport, so the absence of trees can be readily explained on that basis)--so a southern California climate is slightly suggested.  Our best indication, of course, is Skyways, Inc., and the 1950s style cars, from which we may safely date Carlisle's photos to the early 1950s around Los Angeles.

Elvin Carlisle lived in a house on the northeast corner of Indiana and South Streets in Mooresville.  From the late 1960s until around 2011, this was the location of a Kentucky Fried Chicken (KFC) restaurant, as discussed in one of my colleague's blog posts. 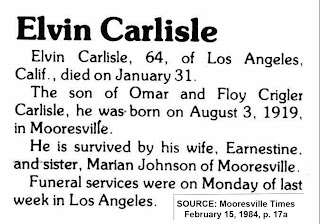