Although John Dillinger was born in Indianapolis (at 2053 Cooper Street), he moved with his family to Mooresville when he was young and spent his formative years here.  (There's a self-guided walking--or driving--tour of significant Dillinger points-of-interest around town.)  After a harsh criminal sentence for a botched local holdup sent him to prison (shaping his unlawful ambitions), he became a hardened criminal, robbing banks and entering American folk legend.

After Dillinger was shot by FBI agents in Chicago in July, 1934, his remains were returned to Mooresville before burial at Crown Hill Cemetery in Indianapolis.  Hundreds braved the 103° F. heat wave to see Dillinger’s body at Harvey Funeral Home on July 25, 1934. The line of onlookers circled the block twice (Harvey Funeral Home was located on the southeast corner of Indiana and Harrison Streets). 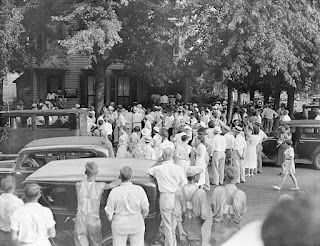 The Indianapolis Star (July 31, 2019) reported that Dillinger's body was scheduled to be exhumed for a documentary on the History Channel,  presumably to extract DNA to compare with that of known Dillinger descendants to establish conclusively that the individual buried in the Crown Hill grave is (or isn't) actually John.  Crown Hill Cemetery, however, balked at the plan, the History Channel bailed on the project, and a lawsuit ensued (no pun intended).  The Indianapolis Star (December 4, 2019) reported that the trial judge ruled Dillinger's body could not be exhumed without Crown Hill's consent.  So we may never know for certain whether Dillinger is actually buried in his family's plot at Crown Hill. 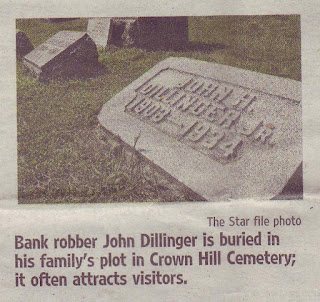 File photo from The Indianapolis Star

Some have questioned whether or not John Dillinger was actually shot near Chicago's Biograph Theater in July, 1934.  When John's father saw the body, he said it was not his son, but John was said to have had plastic surgery, which might have changed his facial appearance.  The FBI stated definitively that Dillinger's body was identified at the time.  Not everyone was convinced, however.  Investigators Jay Robert Nash and Ron Offen popularized a theory that another person was shot, and that Dillinger escaped and lived into the 1960s.  In their book, Dillinger: Dead or Alive? (Chicago: Henry Regnery Co., 1970), Nash and Offen reprinted letters purportedly written by John Dillinger from 1959 and 1963, along with photographs alleging to be Dillinger from that time.  Admittedly, there's a strong resemblance in the 1959/1963 photos with Dillinger photos from the early 1930s.  The '59/'63 pictures show a sixty-something man whose face (particularly the ears) resembles a younger Johnny D.

Of course, it's possible to find lookalikes for many famous people, so the '59/'63 claimant could simply have been an opportunist attempting to cash-in on a criminal's infamous past.  For example,  William T. Phillips, a Washington resident who served in prison along with Butch Cassidy, later convinced some of Cassidy's Utah family that he was Cassidy.  Butch reportedly died in Bolivia in 1908, and Phillips died in Spokane in 1937.  Perhaps Dillinger, too, had an imposter who claimed survival; perhaps Dillinger survived after all.  If DNA tests were made of Dillinger's remains, that mystery might be put to rest, but, as it now stands, exhumation seems unlikely.
Posted by William R. Buckley at 6:18 PM No comments: