Learn about the Great Fire of 1842 that consumed nearly all of Mooresville, Indiana, and the amazing acts of generosity that assured the town's resurrection.

The fire occurred on Tuesday night, November 22, 1842.  According to the New York Tribune, the blaze began in the home of James G. Slocum, in which an unidentified woman and three unidentified children were sleeping, and all four tragically died in the inferno.  Slocum was apparently away at the time. 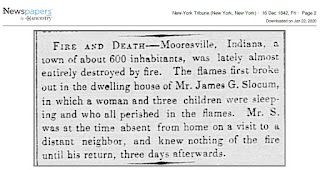 
The New York Tribune article was repeated verbatim in several newspapers, including the following: 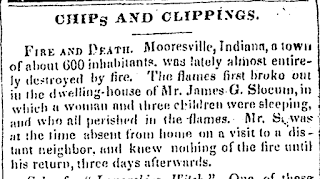 
The identification of Slocum's residence as the start of the conflagration is an amazingly precise detail for a New York City newspaper to relate about a small Indiana village, especially when one considers the following:


So, did the 1842 fire start in James Slocum's home and kill four people?  There is no local evidence to support the New York Tribune's claim, but it can't be completely ruled out.  The deceased woman and children could have had a different surname (or surnames) than Slocum, and they might have been visiting from another community (to which their remains could have been returned and interred).  Thus, looking for Slocums in the county cemeteries or federal censuses would not have identified the fire victims, if they were not named Slocum or came from out-of-town.  Nonetheless, the absence of James G. Slocum from the local historical record and U.S. censuses weighs against the Tribune's account, as does the paper's failure to identify the victims.

"In 1842 a fire of unknown origin hit Mooresville.  Before the fire, there were eleven stores and houses in this wooded area; next morning only the Moore Store and house were left.  Trees were cut, burned, houses and shops were deliberately torn apart to try to check the blaze on both sides of the street.  Work to construct new homes and stores started immediately, so the story goes."  (Page 24 of A Brief History of Mooresville, Indiana, 1824-1974.  [1974].  Mooresville, IN: Dickinson Publishing Company--available online here).

"About 1842 Mooresville was visited by the greatest fire it has ever known.  Beginning with Pa's [Samuel Moore's] store there were ten houses and shops before the fire.  Next morning there was Pa's store and our house left.  The Dr's [doctor's] shop at the west and a dwelling house at the east were torn down to check the fire."   (Early Mooresville [1884] [available online here]).  Margaret Fogleman was the daughter of town founder Samuel Moore (and his wife, Eliza Moore).

During December 1842 news of the Mooresville catastrophe was related in several papers across the United States as well as one in England (click images below to enlarge).


The Wheeling (VA) Gazette article was also cited in many other newspapers, including The New York Herald (December 13, 1842), the Baltimore (MD) American and Commercial Daily Advertiser (December 10, 1842), and the Washington (DC) Daily Globe (December 12, 1842). 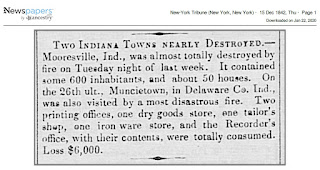 
Some of the accounts quoted the original story that appeared in the Indiana State Sentinel, November 29, 1842, without adjusting for the time delay in printing.  For instance, the New York Tribune on December 15, 1842, incorrectly stated that the fire took place "Tuesday night of last week," which would have been December 6, two weeks after it happened.  This mistake was repeated in the Charleston (S.C.) Mercury, The Philadelphia (PA) Saturday Courier, and the Brooklyn (N.Y.) Daily Eagle.   The Niles National Register was only a week off (reporting November 29 as the fire date, when it was actually the Tuesday before, November 22).


The fire consumed nearly all of the town, sparing only Samuel Moore's general store and residence on the northeast corner of Main and Indiana Streets in downtown Mooresville.  Moore supplied lumber and labor free-of-charge to help citizens rebuild their homes and businesses.

Posted by William R. Buckley at 9:04 AM No comments:

At the beginning of the 20th century, the population of Mooresville, Indiana, was about 1,200.  During that time, local businesses employed roughly 2,500 workers, most of whom commuted to town from surrounding communities on the interurban railway.  Among the largest employers here were Bolton Sorghum Factory (the world's largest in 1897), the Indiana Brass & Iron Bed Factory, two brick manufacturing facilities, and Fall Creek Furniture Company.

This installment of Mooresville Moments, a local history video series, looks at the Pure Oil gasoline station, which was located on the southwest corner of Main and Indiana Streets in downtown Mooresville, Indiana, which had been the site of the Lindley Block (burned down in 1925).