March is Women's History Month, so we are featuring relevant books (as well as audiobooks and movies) on our display "rounder" in the library's grand hall, across from the circulation and adult information desks.  Any of the items displayed may be checked-out using your Evergreen Indiana library card. 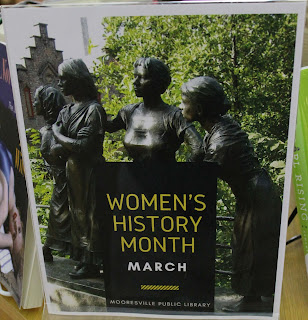 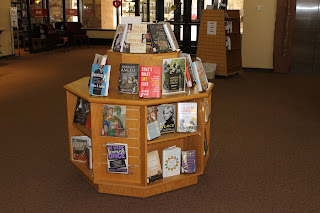 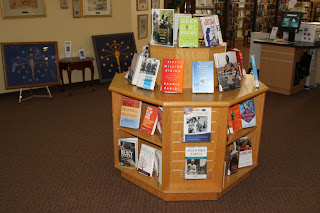 Did you know that famous Hoosier poet James Whitcomb Riley (1849-1916) was a sign painter in Mooresville during the mid-1870s?  Here's where he worked.

The building at 25 South Indiana Street in downtown Mooresville was built around 1865 by Dr. B. H. Perce.  It is the oldest business structure still standing.  Originally two stories, a third floor was added in 1869.

From the time of its construction until about 1900, the first floor of the Perce Building was used as a carriage and paint shop.  It was at this location that the famous Hoosier poet, James Whitcomb Riley, worked as a sign painter when he moved to Mooresville in the Spring of 1874 to live with his aunt and uncle, Jim & Ann Marine.  In addition to sign painting, Riley wrote articles and humorous quips for the local newspaper, the Mooresville Enterprise, as well as for other Morgan County newspapers.  When trade was slack, Riley would slip around the block to hang out with local photographer and Civil War veteran Jarvis P. Calvert at his art and photography studio on East Harrison Street.

The Mooresville Masonic Lodge was located on the second and third floors of the Perce Building beginning in 1869.  From around 1900 to 1920, the first floor and rear sections housed various businesses, including a harness shop, a tin maker, and a plumber.  It became medical doctors’ offices during the 1920s.

From the 1920s through the 1960s, the first and second floors of the Perce Building were used by the Mooresville telephone exchange.  Today, the building is a one-story structure.  Learn more from this slideshow.

Posted by William R. Buckley at 4:26 PM No comments:

February is Black History Month, so we are celebrating by featuring our many relevant items available to checkout from our Evergreen Indiana catalog.  Click here to see a partial listing of available materials. 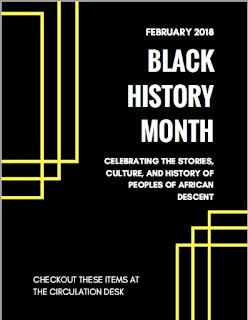 Posted by William R. Buckley at 1:28 PM No comments: